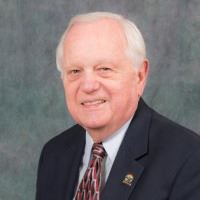 Ray and his wife Judy have been married for over 52 years and have three adult children and six grandchildren. They have lived in Clark County since 1979 and in Washougal since 1990.  Judy is a retired Evergreen School District Elementary School Teacher.

Ray Kutch was appointed to the City Council February 2017. He was elected November 2017 to complete the unexpired term and was reelected in November 2019 for a four year term.

Ray is originally from Western Pennsylvania. He is a graduate of the United States Naval Academy with a Bachelor’s degree in Engineering. He also has a Master’s degree in Personnel Management from George Washington University. Ray served in the Navy as a Naval Flight Officer in Viet-Nam and then as an instructor at the Naval Academy. In the private sector, Ray was a Sales Manager in Industrial Sales and an owner and operator of a Restaurant, Bar and Nightclub.

Ray’s primary goals are public safety and keeping that “small town” feel while encouraging economic growth and job opportunities for our ever-growing community.