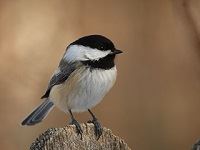 While Black-capped Chickadees are found all across the northern half of the United States, the Chestnut-backed Chickadee is restricted to the Pacific Coast. This species was first discovered in 1837 by the early ornithological explorer, John Kirk Townsend, during his stay at Fort Vancouver. They are common in the Douglas fir forests of western Oregon and Washington, and especially in the dense hemlock and higher forests of the Cascades. They are not restricted to the coastal forest, however. While they are more numerous west of the Cascade Mountains, they can be found in the forested mountainous areas of:

Both Black-capped and Chestnut-backed Chickadees will readily accept a bird box as a nest site. Some people have reported that they have had better success in attracting these birds by filling the birdhouse with coarse sawdust. The chickadees will remove the sawdust before building their nest, which is constructed with moss, hair, and fine plant fibers. Apparently these birds, which nest in dead trees, like to feel as if they have excavated the nest hole on their own.

Two other types of chickadees are also found in Washington State: the Boreal Chickadee, a resident of the highest forested areas of the North Cascades and northeast Washington, and the Mountain Chickadee, which is found high in the mountains and in the pine forests east of the Cascades. The Mountain Chickadee is the same size as the Black-capped Chickadee but is easily distinguished from it by a white line above the eye that would be best described as looking like an "eyebrow."

There are only a few Mountain Chickadee sighting records from Clark County, but this Fall the number of reports may increase. Mountain Chickadees are being reported coming to feeders in the Puget Sound region and in other locations on the west of the Cascades all the way to the coast. I have already received a couple of reports of sightings in Clark County this fall, and they should be watched for at your feeders. There is no explanation yet for why this species is staging an "invasion," but in order to better understand the extent of their occurrence, researchers are requesting that any sightings of these birds west of the Cascades be reported.

If you see any of these birds, please contact me with the number of chickadees seen and the date and location of the sighting, and I will pass that information on to the people compiling that information.