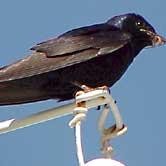 Purple Martins are the largest North American swallow and are on the Washington State Species of Concern List. Washougal has a colony of these birds nesting along the Washougal Dike.

The western Purple Martin reaches the northern limit of its range in Washington and British Columbia. It is not known whether the species was ever abundant in Washington prior to 1900. Purple Martins apparently became locally common in towns and cities from Bellingham to Vancouver and on the Columbia River from 1900 to 1950, as the area experienced rapid growth. The larger population and range expansion was a result of development in and around cities, which provided artificial nesting sites for martins.

This population increase was short-lived due to the introduction of the European Starling and House Sparrow in the late 1940s. Both of these birds are aggressive competitors for nest cavities which caused in a decline in Purple Martins.

Although a handful of martins nest in the natural snag cavities they used before the arrival of European settlers in Washington, the majority now use birdhouses in a variety of designs that have been installed specifically for Purple martins throughout the Puget Trough and on the lower Columbia River. Presently, Purple Martins continue to increase annually in Washington as a result of this human assistance.

Each bird received two metal bands, an aluminum U.S. F7WS. band on the right leg and a green one on the left leg that denotes it is from the Columbia River colonies. These bands are marked with numbers that can be read through a spotting scope or in the hand if the bird is ever recaptured. This information will help researchers discover where this population winters, the route it takes to get there, and where the birds came from if any new colonies are established.

In 2013, volunteer Jay Elder developed a strong interest in working with the martins, and taking it upon himself to learn about them, started a small group of additional volunteers to set up additional structures - there are now 32 plastic nesting gourds and 8 white wooden boxes along the River. They also monitor the martins using the nesting structures (looking through spotting scopes at the tiny bands on the birds for numbers), and then coordinate the banding of nestlings with the cooperation of refuge volunteers and staff. Last year they banded 97 of the little ones.

If anyone is interested in helping with this project, please email Jay Elder.