The City of Washougal water system is operated by trained and certified water works professionals. Washougal’s source water comes from wells. We have two well fields, one adjacent to The City of Camas’ Goot Park, and the other is located at the upper area of Hathaway Park. We add a small amount of chlorine for disinfection, which is actually a safeguard against potential changes in water quality.

The water department monitors the quality of water daily. Be assured 365 days a year your water is checked. If by chance the water quality changes we intend to know about it. 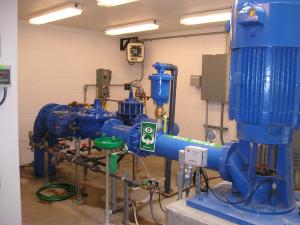 The City of Washougal’s Water Department believes very much in the quality of water we produce. There are some things that you, as a consumer, can do to help us maintain good water quality. Installing backflow devices for our irrigation systems is a safety measure to ensure that contamination doesn’t enter our drinking water. Having them tested annually makes certain that these safety measures are working. Backflow devices are mechanical devices, which can and do fail.

As a responsible water provider the City of Washougal actively seeks to enhance reliability and service through “Capital Improvement” projects. Capital improvement projects are used to address changing needs and aging infrastructure. In 2005 a second reservoir was built to supply the upper east zone. The upper east zone is that area south of “W” Street E of 32nd Street and north of “J” Street. The storage capacity for this zone went from 161,000 gallons to 621,000 gallons. The average daily use for this zone in 2005 was 174,000 gallons a day.

In 2006 the planned capital improvements include drilling a new well and replacement of the old piping at the City’s Lower Well Field. Both of these improvements are geared toward improving overall water production. Increased production is necessary to deal with the rapid growth experienced by Washougal.

Water conservation is also important to all of us. Wise and responsible water consumption saves money and helps stretch a valuable resource. The water quality report, found on the home page of this site has some great ways to help conserve water.

The City of Washougal complies with all state and federal requirements and has its water tested at each of our 6 wells for a large range of substances, some regulated and some not regulated.

As part of Washougal’s testing, total chromium is tested for this includes chromium 6 or “hexavalent chromium”. Chromium 6 is a chemical compound that has been getting some attention in the national media of late. Our most recent test was conducted in May of 2009 and there were no levels of chromium detected in Washougal’s drinking water.

Why Chromium 6 is Bad

Chromium is an abundant element in the earth’s crust. Chromium compounds are naturally found in the environment, due to the erosion of chromium-laden rocks and can be distributed from volcanic eruptions. The presence of chromium can also be the result of industrial operations and other man-made causes. Trace amounts of trivalent chromium in the human diet are linked to being important for sugar and lipid metabolism in the body. However, larger amounts and different forms of chromium can be toxic and carcinogenic. The most prominent example of toxic chromium is hexavalent chromium.

Washington – Today, EPA issued the following statement and background information in response to a study released on December 20, 2010 by the Environmental Working Group:

EPA absolutely has a drinking water standard for total chromium, which includes chromium-6 (also known as Hexavalent Chromium), and we require water systems to test for it. This standard is based on the best available science and is enforceable by law. Ensuring safe drinking water for all Americans is a top priority for EPA. The agency regularly re-evaluates drinking water standards and, based on new science on chromium-6, had already begun a rigorous and comprehensive review of its health effects. In September, we released a draft of that scientific review for public comment. When this human health assessment is finalized in 2011, EPA will carefully review the conclusions and consider all relevant information, including the Environmental Working Group’s study, to determine if a new standard needs to be set.